I CHOSE my bank at random a very long time ago. Aged 18, I walked into a branch and arranged for an account before university. I still have the same account today, although it is now a joint account. The branch is, or possibly was, in Cheadle, near Stockport.

Everything has changed since that long-ago day, not least in banking and my hairline. Internet banking has so far escaped Man On Ledge, as I’ve only just got used to chequebooks being more or less extinct.

So the notion of mobile banking apps that keep track of you and your money is to me the stuff of dystopian sci-fi nightmares. Other people will probably find all this very normal. In the future, apparently, which could be as soon as a week next Tuesday, the way things are going, your bank will be able to use your GPS-enabled phone to remind you that you haven’t been in a certain shop for a while, and that there is just the sort of thing you like in there. Not only that, but your nagging new friend will advise you on how to save money on your broadband or gas – and switch suppliers without asking.

All this and worse will no doubt happen. But don’t ask me for advice. My track record as a futurologist is feeble, as I once dismissed the idea that anyone would want a camera on their mobile phone (bang on the money there, obviously).

And banks as something solid and reassuring, rather stern Victorian parents towering over you, are fast disappearing, and some banks don’t physically exist at all, preferring apps to branches. Well, good luck to them all. I might catch up one day.

Before anyone gets too excited, I recommend that they read The Circle by Dave Eggers. This fast, funny and troubling novel has at its heart a seemingly benign internet company called The Circle, a sort of amalgam of Google, Facebook and Twitter. This organisation runs everything in your life, keeping all your internet activity in one place. A keen young woman, Mae Holland, joins the company and her rapid rise from newbie to the face of an organisation with a sinister stranglehold on our lives races along like a thriller, but a thoughtful thriller, scary for being only a turn or two away from the truth.

And if panicking about the near future is your thing, tune into Channel 4’s creepily engaging new drama, Humans. This eerie affair concerns robots that seem too human, and in some cases may even be human to a degree (after two episodes, it’s all a little confusing, but in a good way).

These human-like robots, or synths, are gentle, ever-attentive and hover around their owners, ready to cater to their every domestic need. Some are designed to fulfil sexual needs and work as prostitutes, which was where last Sunday’s episode ended with a spot of excitement, some blue blood and a yanked-out microchip (or something).

Do we really want this sort of a future and is it too late to opt out? Certainly a bank that keeps track of your every move sounds like a bank that should take a flying leap, if you ask me. What Dave Eggers captures so well in The Circle is the way massive organisations with enormous power over our lives pretend to be our best friends. If we surrender too much to hi-tech corporations or anthropoid robots or banks that want to stick their electronic noses into every aspect of our lives, we lose part of what it means to be human and free to make our own mistakes, don’t we?

TO BEE OR NOT TO BEE: A footnote. The running socks had been airing in the conservatory. Before heading out this morning, I picked a pair and put my foot in the first sock. There was something at the bottom, so I took the sock off and shoved my hand in, thinking it was a bit of tissue or something. Then I shouted in panic (“What have you done now?”) as my hand was stung. There was a bee hiding in the bottom of my running sock, not, it has to be said, a bee-friendly location. The bee flew off after being shaken free, and the sting soon went, as it wasn’t the full bee treatment, merely a warning.

Could my bank have alerted me about that? 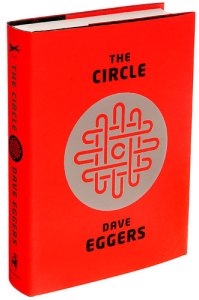